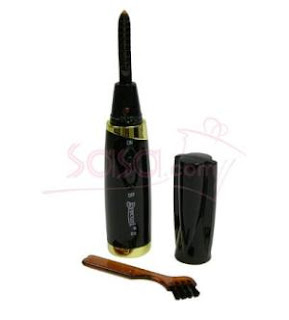 The Eyecurl II has been a staple in my stash for the past few years. Here is my review of it from 2006. Aside from its price increase*, everything still holds true!

Although I had learnt about the Eyecurl II in 2003, I was not inclined to buy it, despite the numerous raves it had garnered from people I knew. This was partly because it was not readily available in Singapore then and mostly because it lacked aesthetic value. It still has the same chunky cylindrical shape I remember it to have. Only now, I have overcome my aversion to its appearance and happily use it frequently, after a chance encounter with it last year alerted me to its presence in Singapore.

I was still not keen on its non-streamlined appearance and the gold detailing on its body that seemed to cheapen it; however, I could not not try it at the great price of S$12.90*, especially after I recalled the earlier raves. I soon discovered that it was the best $12.90 that I had ever spent on an implement for eye makeup, so much so that I use it all the time now, with mascara. It sets and holds mascara perfectly and together with a clear brow gel, my lashes (pathetically short and straight ones that need all the help they can get) stay curled and smudgeproof all day long.

The heat of the Eyecurl II is intense enough to properly set mascara but never too hot to bear. Rest assured that it will never scorch your lashes. There is also a built in guard to prevent the heated part from touching your skin.

This works so well that I have since grown fond of its chubby body and tacky cap. It now seems to convey a sense of sturdiness, as opposed to the earlier negative aesthetic vibes! I am glad I gave it a chance despite not liking its appearance initially. This solid gadget is now indispensable in my eye makeup routine!

The Eyecurl II is powered by a single 1.5 volt AA battery. Unlike other eyelash curlers that use AAA batteries, the Eyecurl II has a higher heat level and lasts longer in terms of battery lifespan. The curler also comes with a brush for cleaning off residue on the grooves to maintain its curling power.

* The Eyecurl II is now S$15.20 at Sasa outlets in Singapore. Sasa periodically offers a 20% discount on its items, so get this then!

It can be found in some parts of Asia and on www.sasa.com where it retails for the great price of US$6, as of this post. Do bear in mind that you have to search for this under the eyelash curlers section of sasa.com and that it is named ‘Hot Brush Eyelash Curler’ there and not ‘Eyecurl II’.