Slated to launch next Wednesday (15 September 2010), Tony Moly will finally be available in Singapore! The first retail outlet will open at Marina Square, while another will open at Bugis Junction before the end of this year. 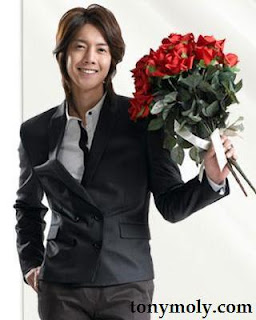 One of Tony Moly’s ace moves was to sign Kim Hyun Joong on as its brand ambassador. Leader of K-pop band SS501, Kim is an immensely well-known Korean celebrity. He also appeared on the popular K-variety program We Got Married, where he charmed viewers with his 4-dimensional behaviour. His role as the white knight in Boys Before Flowers propelled him to greater fame and he is currently starring in Playful Kiss, a Korean remake of Taiwanese drama It Started With A Kiss (itself a re-telling of the Japanese manga series Itazura na Kiss).

Alas, according to this article translated by SS501Ode, Kim is no longer the face of Tony Moly. Apparently, he has signed/will sign on with The Face Shop. I wonder if this means that the brand paraphernalia and merchandise will still have his face on them when we get Tony Moly.*

If you’re a fan of the Brown Eyed Girls though, you’d be glad to know that they are now the new faces of Tony Moly. Tony Moly is also currently looking for a male counterpart to front the brand.

* I’m not even sure if they have his image on them in the first place; I guess I’m channelling Nature Republic with its paper bags that have Rain/Bi’s huge mug printed on them (Rain is the brand ambassador for Nature Republic). :D

Butterfly Ball, Lipstick Queen’s latest lippy offering, sounds like a sheer beauty dream. The collection not only  promises subtlety of colour, it also flashes a unique iridescent turquoise when hit by the light. I like that its alliterative name conjures up an image of dancing butterflies…and playful illumination….